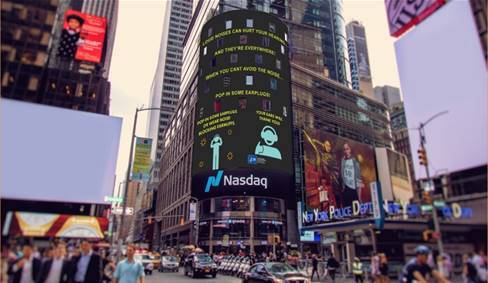 The National Center for Environmental Health’s (NCEH) noise-induced hearing loss (NIHL) initiative has hit the big times…Times Square, that is, a major commercial intersection, tourist destination, and entertainment Mecca known as “The Crossroads of the World.”

Times Square is located in the midtown Manhattan section of New York City (NYC) at the junction of Broadway and Seventh Avenue. It extends from West 42nd to West 47th Streets and is extravagantly and very brightly decorated with billboards and advertisements. A 15-second public service announcement for noise-induced hearing loss will be advertised on two of the largest billboards: the NASDAQ unit with 10,080 square feet, and the Thomson Reuters unit with 7,691 square feet, during the weeks of the Macy’s Thanksgiving Day parade (11/25/19-12/2/19) and the week of New Year’s Eve (12/24/19-12/31/19).

One of the most popular annual attractions in NYC, the Macy’s Thanksgiving Day Parade has been a New York City tradition since 1924. Attracting more than 3.5 million people to the streets of Manhattan every year, and watched by an audience of millions of TV viewers, the displays are expected to be viewed by upwards of 21 million people. An estimated one million people celebrate New Year’s Eve at Times Square with over a billion watching throughout the world.

The public health messages are clear…

The Utilization of Telehealth Services

During the COVID-19 pandemic, the American Academy of Audiology (2020) provided audiologists with guidance regarding the use of telehealth services. In October 2021, the Academy released a position statement titled The Use of Telehealth for the Delivery of Audiological Services. Members can access this statement here. While the COVID-19 pandemic may have expanded telehealth services,…

At the end of September 2022, the Centers for Disease Control and Prevention (CDC) released data overviewing rates of death resulting from unintentional falls between the years of 1999–2020 by adults 65 years and older (Garnett et al, 2022). The report showed that death rates have increased, with the largest increase seen by those aged…